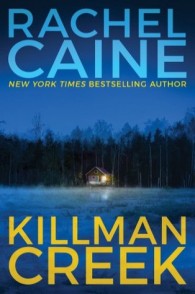 Not as good as the first book, if I’m to be honest, but still a very fun read. When we last saw Gwen Proctor at the end of Stillhouse Lake, she’d just barely managed to keep her children out of the vengeful reach of her ex-husband, the infamous serial killer Melvin Royal. But that was before the prison break. Now Melvin is on the loose, and with no shortage of help from his network of psychotic fans, he’s also many times more dangerous and resourceful enough to evade the cops.

Tired of running, Gwen knows that as long as her ex-husband is still out there, she and her family will never be safe. Their house at the peaceful lakeside has become a target, prompting Gwen to hide her daughter Lanny and son Connor away with a neighbor so that they will be protected. With her kids out of harm’s way, there’s only one thing left to do. Not content to sit around waiting for news, Gwen and her friend Sam Cade, the brother of one of Melvin’s victims, decide to team up and go hunting for Melvin by themselves.

There’s no denying Killman Creek was an exciting read. Having enjoyed the first book immensely though, there were several areas where I felt this sequel was weaker, not to mention a few plot developments that were just plain infuriating. There was also a decreased sense of urgency, with the story taking a long time to build. At first, I thought we would be getting a lot more thrills by following Gwen and Sam as they go hunting, but turns out, they just end up being played for fools at every turn. This portrayal made them seem unprepared, gullible, and incompetent—a disappointing contrast from the confidence they instilled in Stillhouse Lake.

I did, however, enjoy getting perspective chapters from Gwen’s children, Lanny and Connor. That said, the new POVs came with their own issues, namely the way Caine milked the “naïve child” trope. Yes, we’ve all seen how young children in these kinds of stories are often manipulated because they don’t know any better, but it still irked to see how quickly and unquestioningly Gwen’s kids quickly turned on her, especially after everything she’s done for them and knowing the evil and deception their father was capable of.

But perhaps the biggest gut-punch was what happened to Sam’s character. Pretty much any chemistry that was established between him and Gwen was nullified by the events in this book, and I am still mystified as to why the author decided to take their relationship in this direction, in essence throwing all her hard work out the window. If Sam had any reason to still distrust Gwen, it should have been resolved in the first book, and I would have liked to see them move on to a new and different conflict. Instead, we retread old ground, using an unrealistic and far-fetched scenario to force a wedge between them. Again, after everything Gwen has done to prove herself, it just didn’t feel right for all that goodwill to be swept aside like it meant nothing to the people who supposedly loved her and had her back after all this time.

Still, while it may seem like this review is full of nothing but complaints, I do want to make it clear that I did enjoy this—just not as much as the first book. As a sequel though, I thought it was decent, and if you were a fan of Stillhouse Lake, there’s absolutely no reason why you shouldn’t read this next chapter of Gwen’s hair-raising battle against the monstrous Melvin Royal. Despite my criticisms of Killman Creek, I also really loved how it ended. In fact, given the tidy way it ended, I was actually quite surprised when I discovered there will be at least one more novel, disproving my initial thought that this series would be a duology. I’m curious to see how Rachel Caine will continue the story, so there is no doubt in my mind I’ll be picking up the next installment.

More on The BiblioSanctum:
Review of Stillhouse Lake (Book 1)