Persepolis Rising by James S.A. Corey, the seventh book of the much raved about Expanse series. I’ve been waiting soooo impatiently for this one, and I can’t wait to start!

Also thanks to Subterranean Press for an ARC of Phoresis by Greg Egan! Like a lot of the books the publisher sends to me early, I can’t seem to find anything online about this book yet, but the description on the back describes it as a narrative chronicling a tale of two planets. One is inhabited while the other is not, though with the former’s resources dwindling, its people are hoping to build a bridge from their planet to its (hopefully) inhabitable sister. Sounds interesting indeed.

Next up is a new-to-me book courtesy of Fiery Seas Publishing and the kind folks at Wunderkind PR. Demon Freaks by J.R.R.R. Hardison sounds totally bizarre. A group of punk rocker kids need to ace their SATs so they sequester themselves in an isolated cabin in the woods in order to cram for it. What could go wrong? The evil Golfer’s Association, that’s what. This might be a little too silly for me, but if you enjoy quirky books like this, you should check it out!

Another surprise arrival coming up, this one with thanks to Entangled Publishing. The November Girl by Lydia Kang follows a half-mortal named Anda who is born of the lake and is the bringer of November storms. When a runaway named Hector ends up on her island on Lake Superior, an unexpected relationship forms. I gotta admit, while I’m generally iffy when it comes to magical realism novels, something about this one really speaks to me. It’s also gotten some fantastic reviews so far, so hopefully I’ll have time to take a look.

With thanks to Inkshares I also received a finished copy of Sorcery for Beginners by Euphemia Whitmore with Matt Harry. I had hoped to read the ARC of it this summer, but the release date snuck up on me quick!

And from BookishFirst, I read and shared my thoughts on an excerpt from The Girl in the Tower by Katherine Arden, and ended up winning a raffle for the ARC! I’ve already read it and loved it, so be sure to keep an eye out for my review next week.

Kicking off my next batch of new books is an ARC of Child of a Mad God by R.A. Salvatore, the start of a new series from the author who brought us Drizzt Do’Urden. I also got an ARC of Shroud of Eternity by Terry Goodkind, the sequel to Death’s Mistress. Next up are a couple of finished copies: Hymn by Ken Scholes, which is the final volume of his Psalms of Isaak series (unfortunately I have not read any of the previous books), and Weave a Circle Round by Kari Maaren which I’m really looking forward to reading (hopefully soon!) I also love the adorable key bookmark it came with. Thank you Tor for all the great books!

I would also like to thank Pyr books for sending me a finished copy of The Nine by Tracy Townsend, which I am so excited to read especially since I’ve heard such amazing things about it recently! I couldn’t quite manage to fit it in my November schedule, but I’m starting it now. Since I prepare these posts ahead of time, by the time you’re reading these words, hopefully I’ll be well into the story already and enjoying the hell out of it. And finally, I received an ARC of Blade and Bone by Jon Sprunk, which is the third volume of the Book of the Black Earth series. I’ve only read the first book, so yes, I’m a bit behind!

Wait, what’s this? More goodies from Tor! A couple weeks ago I was surprised to receive from them a large lumpy package, and when I opened it, I found six of these paperback-sized hardcovers inside. Apparently they are part of a new line of miniature books that Tor just put out, with selections ranging from Tor’s older classic titles to newer releases. The full list of releases are Edgedancer by Brandon Sanderson; Six Months, Three Days, Five Others by Charlie Jane Anders; Ender’s Game by Orson Scott Card; Wild Cards edited by George R.R. Martin; Old Man’s War by John Scalzi; and From the Two Rivers by Robert Jordan. With dimensions of 4 x 6, these are definitely “mini-sized” and oh so cute! My thanks again to Tor for this cool set, and also for giving me a great holiday gift idea for some of my more bookish friends. 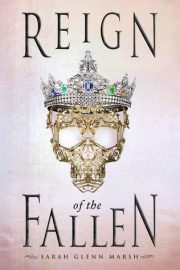 After several weeks of binging on NetGalley I’ve resolved to reign in my requests this month, so there’s only a couple new books in the digital haul. From St. Martin’s Press/Wednesday Books I was sent a widget invite to Between the Blade and the Heart by Amanda Hocking, a Young Adult novel inspired by the Valkyries of Norse mythology. From First to Read I also lucked out and scored a review copy of Reign of the Fallen by Sarah Glenn Marsh, which I had entered a draw for because it looked interesting!

A quick summary of the reviews I’ve posted since the last update:

A huge thanks to author S.C. Flynn for stopping by The BiblioSanctum this week with a guest post featuring a character from his new novel The Hidden Face!

Here’s what I’ve “unstacked” from the TBR since my last roundup post. Reviews are coming soon!