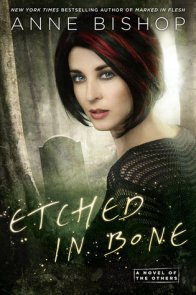 Etched in Bone by Anne Bishop

Series: Book 5 of The Others

So, another one of my favorite urban fantasy series has come to a close. Finding out that Anne Bishop will soon be following up with a spinoff series did soften the blow somewhat, but I won’t lie; when I picked up this final chapter of The Others starring Meg Corbyn and Co., my heart was filled with excitement but also a lot of bittersweet feelings. I’m definitely going to miss spending time in Lakeside Courtyard and reading about its colorful residents.

Since Etched in Bone is the fifth and final installment of the series though, please beware this review may contain spoilers for the previous books. Marked in Flesh saw the Humans First and Last movement violently crushed by the Elders, and the repercussions of that event have been widely and deeply felt across the land. Pro-human groups have lost much of their power, and many of their remaining cities are now cut off from resources and protection. The thriving community of Lakeside Courtyard, having emerged from the Elders’ wrath largely unscathed, now finds itself in the position to offer help to those in need. Its wolf-shifter leader Simon Wolfgard is seen as one the more sympathetic Others, and word soon spreads that they are offering jobs and shelter to human refugees who are willing to work hard and won’t cause trouble.

Everything seems to be running smoothly, until the arrival of Cyrus James “Jimmy” Montgomery. Against his better instincts, Simon decides to let Jimmy stay in part because he is the brother of Lieutenant Montgomery, a well-respected man in Lakeside Courtyard, but also because Jimmy is the brother and son of two other current residents. That decision to show compassion ultimately turns out to be a huge mistake, for Jimmy is a con artist, seeing this opportunity not as the blessing it is but as an easy meal ticket and a way to scam money. Not realizing that the Terra Indigene reserve the worst kinds of punishment for his sort, Jimmy continues to emotionally blackmail his sister and abuse his privileges at Lakeside Courtyard, until it’s only a matter of time before he takes things too far.

I’m going to be honest here. I thought Etched in Bone ended up being another fantastic installment, but as an ending, it was somewhat disappointing. I think Bishop might have overplayed her hand when it came to the resolution of the HPL storyline in the previous book, because let’s face it, anything coming up on the heels of that epic conclusion in Marked in Flesh would be hard-pressed to rival that that act. And indeed, the conflict in Etched in Bone felt rather tame in comparison. For example, if this had been just another book in the series, I think Jimmy Montgomery would have made a pretty decent villain. For a series conclusion though? A small bit conman felt too low-key and insignificant to be the story’s main focal point, especially since we’d just seen the likes of Nicholas Scratch, leader of the Thaisian HFL who had the power of an entire movement behind him.

Then, there’s Simon and Meg. I’ve never made it a secret how I feel about these two. Their romance, if you could even call it that, has always weirded me out. I don’t care much for Meg either, and my enjoyment for this series has always been carried by my love for some of the other characters. Other than being able to tell the future by cutting herself (which the Others actually want her to stop doing), Meg brings absolutely no valuable skills to Lakeside Courtyard, and yet the Others all bend over backwards to treat this helpless little woman-child like a queen. To me, Simon’s attraction to Meg has always felt more like a loyal guard dog’s devotion to his master, like she’s something fragile to be protected and kept safe because she’s too weak to look after herself, and in turn she treats the wolf-shifter like he’s her big fuzzy pet. Bishop had this one last chance to finally set their relationship on the right course, and I was a little surprised that she didn’t take it. Simon still bends to “his Meg’s” every whim, while she continues to be portrayed a meek character who requires constant sheltering and protection.

Bottom line, Etched in Bone would have worked perfectly fine as a middle book of a series, but as a series conclusion, I felt it left something to be desired. But while my review probably goes against the grain of the overwhelmingly positive response this book has been getting, I just want to say I still adore The Others, and if nothing else, this was a satisfying and happy ending for everyone involved. I’m beyond excited that Bishop will continue to write stories set in Thaisia because I’ve enjoyed every moment I’ve spent in this world, and even though this novel didn’t exactly end with the bang I’d wanted, it was nonetheless a very good book and a must-read for fans.

17 Comments on “Book Review: Etched in Bone by Anne Bishop”