A review copy was provided by the publisher in exchange for an honest review. All opinions are our own.

The Waking Fire by Anthony Ryan

Series: Book 1 of The Draconis Memoria

A departure from his Raven’s Shadow trilogy, Anthony Ryan’s latest novel The Waking Fire is the start of a new series featuring a compelling blend of fantasy, adventure, and intrigue. And if there was one thing I learned from reading Queen of Fire, it’s that Ryan has a talent for writing amazing scenes of battle on the high seas—which are also plentiful in this new book. Then, there are the dragons. Oh, we mustn’t forget the dragons.

In this fascinating new world of The Draconis Memoria, no other commodity is prized above what the people call “product”, a deceptively innocuous term for something in fact truly magical and amazing: Dragon’s blood. By itself, product is unremarkable—volatile and dangerous, even—save for the powers it bestows to a very small slice of the population known as the blood-blessed, those rare men and women who are literally one in a thousand. Their abilities that manifest are so advantageous and formidable, that entire industries have been dedicated to the harvesting of dragon blood, either from hunting the creatures or taking it from those kept in captivity. Unfortunately though, over-exploitation has depleted their numbers in the wild, and those in the Ironship Syndicate who have noticed this weakening have real fears that the ensuing shortage of product will lead to war with their neighbors in the Corvantine Empire.

However, a group in the Syndicate has been clandestinely following up on the whispers of a rare breed of drake. Ancient texts tell of the White, a dragon that is supposed to be far more powerful than the commonplace Reds, Greens, Blacks and Blues. By all accounts, the white dragon is a myth—but there are those who believe with all their hearts that it exists and would do whatever it takes to get their hands on its blood, a treasure worth beyond anything imagined.

The Waking Fire tells a story of how three disparate characters find themselves on a quest to seek this elusive creature of legend. First there’s Claydon Torcreek, who is not just your run-of-the-mill slippery thief. That’s because Clay is also a blood-blessed, albeit unregistered, using his powers to give himself an advantage over his fellow criminals and scoundrels. Then one day, he gets arrested and pressed into his Uncle Braddon’s service. As it happens, Braddon is about to embark on a journey which would require someone of Clay’s talents. Next up is Corrick Hilemore, an officer newly assigned to an ironship, whose captain is in the early stages of testing out a faster, more powerful engine. As a character, Hilemore didn’t really stand out for me, and it was also a while before we saw his sections relate to the overall story. Still, I have to say his chapters were undoubtedly some of the most exciting (see earlier comment about amazing ship battles!) filled with encounters with pirates and with Corvantine enemy forces. But by far my favorite character was probably Lizanne Lethridge, a spy and assassin tasked by her superior to gather intelligence which would help in the hunt for the white drake. Lizanne embodies everything I love about female spy characters—disciplined and efficient, but also smart and independent enough to not blindly follow orders when her gut instinct tells her something isn’t right.

I also enjoyed Anthony Ryan’s dragons, even though they are more incidental than anything, for it is their blood that is the focus on this story. The power that a blood-blessed can summon upon consuming product will depend on the type of dragon the blood came from. A useful maxim to remember is “Blue for the mind, Green for the body, Red for the fire, Black for the push.” The idea of a “gifted” section of the populace being able to gain a variety of physical and mental enhancements or abilities from chugging certain kinds of substances is definitely not new (for instance, Brandon Sanderson’s magic system in Mistborn immediately comes to mind) but I liked how Ryan incorporated the dragon mythos, and he made it conceivable that uncanny powers can be derived from the essence of these magical creatures.

The plot pacing is a bit uneven, but to be fair that’s not something uncommon for a lot of these big epic fantasy novels. I liked that the book hooked me in straight away, the first ten or so pages of the prologue introducing a riddle which sets the tone for the rest of the story. The three character perspectives are well-balanced and explores multiple facets of the story in depth as well as a great deal of what’s happening around the world. If you enjoy fantasy quest narratives and all that comes along with them, then you should also have a great time following Clay, Lizanne and Hilemore on their individual trials and challenges. As with any long journey, the three of them will experience exciting adventures but also plenty of downtime to regroup and recuperate. Always though, the plot presses forward with its intrigues and character development. By the time the book ended, I was practically screaming at that cliffhanger.

Overall I really enjoyed this book. I was left with a couple thoughts when I finished. First of all, Anthony Ryan has seriously upped his game. The Waking Fire is proof that his debut trilogy Raven’s Shadow was just a taste of more to come from that brilliant mind of his. And the second thought on my mind of course was: WHEN WILL WE GET THE SEQUEL? I’m definitely on board with this new series! 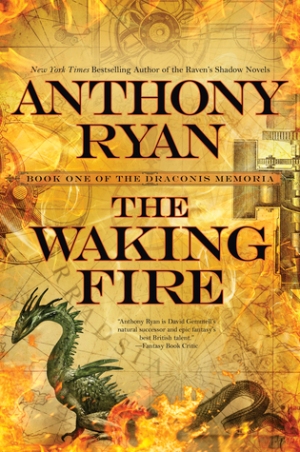 Time for a giveaway! With thanks to the publisher, the BiblioSanctum has one print copy of The Waking Fire up for grabs! The giveaway is open to residents of the US.  To enter, all you have to do is send an email to bibliosanctum@gmail.com with your Name and valid Mailing Address using the subject line “THE WAKING FIRE” by 11:59pm Eastern time on Friday, July 29, 2016.