As book bloggers, sometimes we get so caught up reading review titles and new releases that we end up missing out on a lot previously published books. As a result, one of my goals this year is to take more time to catch up with my backlist, especially in my personal reading pile. And it seems I’m not the only one. Backlist Burndown is a new meme started by Lisa of Tenacious Reader. Every last Friday of the month, she’ll be posting a review of a backlist book and is inviting anyone interested to do the same. Of course, you can also review backlist books any day you want, as often you want, but be sure to watch for her post at the end of the month to link up! 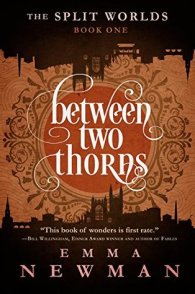 Between Two Thorns by Emma Newman

Series: Book 1 of The Split Worlds

I had the wonderful pleasure of reading this book with all the good folks of the SF/F Read Along group, and I do recall being so glad when I saw Between Two Thorns on the docket since this a novel that has been on my to-read shelf for years now. With book four set to come out later this summer, it’s time to get caught up with the series.

The book follows four characters, but they’re introduced at different times and it’s not immediately clear how they’re all related. First the story opens with an introduction to Sam, just your average guy stumbling home drunk from night with the boys at the bar. In a classic case of wrong-place-wrong-time, he slips into an alleyway hoping to relieve himself, but instead winds up interrupting a paranormal crime in progress. Next up is Cathy, a young woman living a literal double life in our world (called Mundanus) while trying to escape her family and the strict old-fashioned society of her home world, the Nether. However, her time in hiding comes to an end when she is discovered by a high Fae named Lord Poppy, forcing Cathy to return home to face the music.

Unhappy to be back in the Nether, Cathy is further horrified when she learns that her parents had negotiated a marriage contract for her in her absence. The man she is betrothed to turns out to be a young lord from another noble house named Will, recently returned from his own expedition into Mundanus. Meanwhile, a supernatural police force called the Arbiters of the Split Worlds Treaty is busy investigating the high profile disappearance of the Master of Ceremonies—who also happens to be Cathy’s uncle. With the help of a powerful sorcerer, an Arbiter agent named Max follows the leads to uncover an even greater conspiracy.

Between Cathy, Max, Sam, and Will, there are a lot of story threads here and it does take a while for everything to come together. Reading this one by weeks and sections almost exacerbated the issue for me in some ways, because it made the disjointedness even more pronounced. For instance, Sam disappears after the introduction and is absent for a large section until his POV gets picked up again around the three-quarters mark, and there are a lot of other connections that don’t happen until closer to the end of the book. That said, I enjoyed the air of mystery surrounding all of the novel’s events, and while the plot could have been tighter and better paced, I thought the story was entertaining and engaging.

The characters were clearly the highlights. At the center of the book is Cathy, the glue who holds it all together. Her reasons for leaving home were immediately apparent, making it easy to relate and sympathize with her. Through her eyes, I could understand why she became fascinated with Mundanus, and even fell in love with a Mundane. While Cathy’s behavior grated on me at times, it’s also true that she’s in a bad spot. I felt for her, watching all her freedom disappear the moment she was dragged back to Nether and being forced to marry someone against her will while her heart still belonged to another.

Max, Sam, and Will were also interesting characters, though perhaps under-utilized in different ways. Will for one really grew on me, despite being a late arrival to the story. It took me a while to figure him out, but then again, I do love characters that keep me guessing. Sam, who was neglected for much of the story, ended up playing a rather big role, and even added some humor to the plot. I just wished we could have seen more of his home life between all the chapters set in the Nether, and a lot about his background is still a big question mark. Still, I think I was most disappointed with Max, a character whose soul has been severed from his body as per the Arbiter policies to ensure incorruptible agents. I was so excited when his section was first introduced with all the mystery and world-building behind the Arbiters, but I feel Max’s part in the story ultimately became overshadowed by the other characters.

Still, I have a feeling that the sequel will provide a lot more answers, and the characters who played a smaller role in this one will get their chance to shine. As a series opener, Between Two Thorns does a really good job setting up the scene for us. It does take a while for the story to gain momentum and have all the plot threads come together, but a little patience will pay off big time. I’m definitely intrigued by this world and its characters, and I’m glad I finally got to read this book.

13 Comments on “Backlist Burndown: Between Two Thorns by Emma Newman” 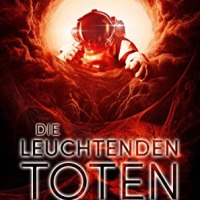