Top Ten Tuesday: Top Ten Most Anticipated Audiobook Releases For The Second Half Of The Year

Top Ten Tuesday is an original feature/weekly meme created by The Broke and the Bookish. They created the meme because they love lists. Who doesn’t love lists? They wanted to share these lists with fellow book lovers and ask that we share in return to connect with our fellow book lovers. To learn more about participating in the challenge, stop by their page dedicated to it and dive in!

This week’s topic: Top Ten Most Anticipated Audiobook Releases For The Second Half Of The Year 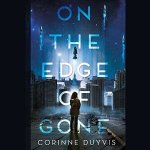 On the Edge of Gone by Corinne Duyvis, narrated by Stephanie Willis

Denise and her mother and sister, Iris, have been assigned to a temporary shelter outside their hometown of Amsterdam to wait out the blast, but Iris is nowhere to be found, and at the rate Denise’s drug-addicted mother is going, they’ll never reach the shelter in time. A last-minute meeting leads them to something better than a temporary shelter – a generation ship scheduled to leave Earth behind to colonize new worlds after the comet hits. But everyone on the ship has been chosen because of their usefulness.

Denise is autistic and fears that she’ll never be allowed to stay. Can she obtain a spot before the ship takes flight? What about her mother and sister? When the future of the human race is at stake, whose lives matter most? 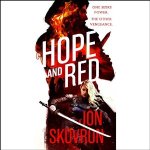 Hope and Red by Jon Skovron, narrated by TBA

A nameless girl is the lone survivor when her village is massacred by biomancers, mystical servants of the emperor. Named after her lost village, Bleak Hope is secretly trained by a master Vinchen warrior as an instrument of vengeance.

A boy becomes an orphan on the squalid streets of New Laven and is adopted by one of the most notorious women of the criminal underworld, given the name Red, and trained as a thief and con artist.

When a ganglord named Deadface Drem strikes a bargain with the biomancers to consolidate and rule all the slums of New Laven, the worlds of Hope and Red come crashing together, and their unlikely alliance takes them further than either could have dreamed possible.

Valerie Torrey took her son, Alex, and fled Los Angeles six years ago – leaving both her role on a cult sci-fi TV show and her costar husband after a tragedy blew their small family apart. Now Val must reunite nine-year-old Alex with his estranged father, so they set out on a road trip from New York, Val making appearances at comic book conventions along the way.

As they travel west, encountering superheroes, monsters, time travelers, and robots, Val and Alex are drawn into the orbit of the comic-con regulars, from a hapless 20-something illustrator to a brilliant corporate comics writer struggling with her industry’s old-school ways to a group of cosplay women who provide a chorus of knowing commentary. For Alex this world is a magical place where fiction becomes reality, but as they get closer to their destination, he begins to realize that the story his mother is telling him about their journey might have a very different ending than he imagined.

A knowing and affectionate portrait of the geeky pleasures of fandom, A Hundred Thousand Worlds is also a tribute to the fierce and complicated love between a mother and son – and to the way the stories we create come to shape us.

The Paradox by Charlie Fletcher, narrated by TBA

Sometimes you look in the mirror – sometimes it looks back.

Those who belong to the secret society called The Oversight know many things. They know cold iron will hold back the beasts in the darkness. They know it is dangerous to stand between two mirrors. And they know that, despite their dwindling numbers, it remains their duty to protect humanity from the predations of the supernatural. And vice versa.

But two of the society’s strongest members, Mr. Sharp and Sara Falk, are trapped in the world between the mirrors, looking for each other, searching for a way back home. What they discover there will have ominous consequences both for The Oversight and the world it protects – effects that will make them question everything they thought they knew.

The dark waters rise. The candle is guttering. But the light still remains. For now….

Sisters Rose and Lily Martin were inseparable when they were kids. As adults they’ve been estranged for years, until circumstances force them to come together to protect Rose’s daughter.

Ten-year-old Antoinette has a severe form of autism that requires constant care and attention. She has never spoken a word, but she has a powerful gift that others would give anything to harness: She can heal things with her touch. She brings wilted flowers back to life, makes a neighbor’s tremors disappear, and changes the normal course of nature on the Kentucky flower farm where she and her mother live. Antoinette’s gift, though, puts her own life in danger, as each healing comes with an increasingly deadly price.

As Rose – the center of her daughter’s life – struggles with her own failing health and Lily confronts her anguished past, they, and the men who love them, come to realize the sacrifices that must be made to keep this very special child safe. 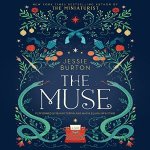 From the number-one internationally best-selling author of The Miniaturist comes a captivating and brilliantly realized story of two young women – a Caribbean immigrant in 1960s London and a bohemian woman in 1930s Spain – and the powerful mystery that ties them together.

England, 1967. Odelle Bastien is a Caribbean émigré trying to make her way in London. When she starts working at the prestigious Skelton Institute of Art, she discovers a painting rumored to be the work of Isaac Robles, a young artist of immense talent and vision whose mysterious death has confounded the art world for decades. The excitement over the painting is matched by the intrigue around the conflicting stories of its discovery. Drawn into a complex web of secrets and deceptions, Odelle does not know what to believe or who she can trust, including her mesmerizing colleague, Marjorie Quick.

Spain, 1936. Olive Schloss, the daughter of a Viennese Jewish art dealer and an English heiress, follows her parents to Arazuelo, a poor, restless village on the southern coast. She grows close to Teresa, a young housekeeper, and Teresa’s half brother, Isaac Robles, an idealistic and ambitious painter newly returned from the Barcelona salons. A dilettante buoyed by the revolutionary fervor that will soon erupt into civil war, Isaac dreams of being a painter as famous as his countryman, Picasso.

Raised in poverty, these illegitimate children of the local landowner revel in exploiting the wealthy Anglo-Austrians. Insinuating themselves into the Schloss family’s lives, Teresa and Isaac help Olive conceal her artistic talents with devastating consequences that will echo into the decades to come. 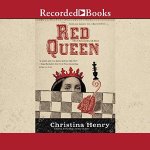 The author of Alice takes listeners back down the rabbit hole to a dark, twisted, and fascinating world based on the works of Lewis Carroll.

The land outside of the Old City was supposed to be green, lush, hopeful. A place where Alice could finally rest, no longer the plaything of the Rabbit, the pawn of Cheshire, or the prey of the Jabberwocky. But the verdant fields are nothing but ash – and hope is nowhere to be found.

Still, Alice and Hatcher are on a mission to find his daughter, a quest they will not forsake even as it takes them deep into the clutches of the mad White Queen and her goblin or into the realm of the twisted and cruel Black King. The pieces are set, and the game has already begun. Each move brings Alice closer to her destiny. But to win she will need to harness her newfound abilities and ally herself with someone even more powerful – the mysterious and vengeful Red Queen.

Rendered in exquisite detail, The Muse is a passionate and enthralling tale of desire, ambition, and the ways in which the tides of history inevitably shape and define our lives.

The Hatching by Ezekiel Boone, narrated by George Newbern

An astonishingly inventive and terrifying debut novel about the emergence of an ancient species, dormant for over 1,000 years and now on the march.

Deep in the jungle of Peru, where so much remains unknown, a black, skittering mass devours an American tourist whole. Thousands of miles away, an FBI agent investigates a fatal plane crash in Minneapolis and makes a gruesome discovery. Unusual seismic patterns register in a Kanpur, India, earthquake lab, confounding the scientists there. During the same week, the Chinese government “accidentally” drops a nuclear bomb in an isolated region of its own country. As these incidents begin to sweep the globe, a mysterious package from South America arrives at a Washington, DC, laboratory. Something wants out.

The world is on the brink of an apocalyptic disaster. An ancient species, long dormant, is now very much awake. 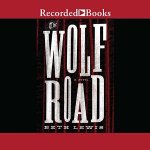 The Wolf Road by Beth Lewis, narrated by Amy McFadden

True Grit meets The Road in this postapocalyptic psychological thriller – narrated by a young girl who has just learned that her adopted father may be a serial killer and that she may be his next victim.

Everything Elka knows of the world she learned from the man she calls Father, the solitary hunter who took her under his wing when she was just seven years old. He has taught her how to shoot, track, set snares, and start fires – all the skills she needs to survive in a frozen, lawless land where civilization has been destroyed and men are at the mercy of the elements and each other. But the man Elka thought she knew so well is harboring a terrible secret. He’s a killer. A monster. And now that Elka knows the truth, she, too, is in danger.

The Wolf Road is an intimate cat-and-mouse tale of justice and revenge played out against a vast, unforgiving landscape – told by an unforgettable, tough-as-nails young heroine whose struggle to escape the terrors of her past and rejoin humanity are at once horrifying and heartbreaking.

Carrie Fisher’s latest book is based on journals she kept while filming the original Star Wars movie.

What books are you looking forward to for the second half of the year?

8 Comments on “Top Ten Tuesday: Top Ten Most Anticipated Audiobook Releases For The Second Half Of The Year”