We’re continuing with The Split Worlds read-along this week, starting with the first book Between Two Thorns! If you’re interested in joining this Read-Along, visit the SF/F Read-Along group for more information and to join the discussion. 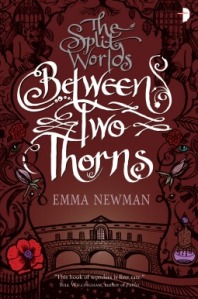 The new season is starting and the Master of Ceremonies is missing. Max, an Arbiter of the Split Worlds Treaty, is assigned with the task of finding him with no one to help but a dislocated soul and a mad sorcerer.

There is a witness but his memories have been bound by magical chains only the enemy can break. A rebellious woman trying to escape her family may prove to be the ally Max needs.

But can she be trusted? And why does she want to give up eternal youth and the life of privilege she’s been born into?

1. We get to meet Will and see a couple of different sides to him. What do you think of Cathy’s betrothed?

Mogsy: Will’s going to end up being an unexpected ally for Cathy, I think. As you say, there are two sides to him: the snide, foppish, and competitive side that came out when he was trying to one-up his brother and impress his family; but then there’s also the softer, more compassionate side that came out when he did what he could to include his little sister in the gift-giving (I thought that was such a sweet scene). Like the rest of his family, Will still seems overly concerned with matters of reputation and image, but I have a feeling that in time he’ll surprise us and Cathy.

Tiara: I think it’s very easy to discount Will as another snotty guy, but reading between the lines, he does seem like he could be someone who could persuaded to help Cathy despite any ill feelings they may have toward one another. He definitely understands her love of Mundanus, even if he’s not quite beyond the social mores of the Nether. That shows he at least has the capacity to think outside of what he’s told, and as Mogsy mentioned, he also has a capacity for compassion and warmth, which will likely prove important later in the story.

2. The Sorcerer seems to be acting a bit inconsistently, any ideas what is going on with him?

Tiara: No idea right now. Still a little too early for me to start making any assumptions, or rather, I don’t feel like I have enough threads to cling to to start making assumptions. I do find it peculiar that he seems to be relying on Petra’s permission to say and do certain things. Hopefully, Petra isn’t really an evil overlord masquerading around as a friendly face.

Mogsy: I’m actually really confused about this part of the story right now. I don’t feel comfortable drawing any conclusions about the Sorcerer from the current patterns (if that’s indeed what they are!) and Tiara is usually way better at me on picking up on things, so if she has no idea, then I have no chance!

3. Things are starting to link up now that we have context for the events at the beginning of the book, but how do you think it all connects together? Could it really be all coincidence? How do you think Cathy will tie into Max’s story?

Tiara: I don’t think it’s coincidence, but again, just as with the Sorcerer, I’m not quite sure where the author is going with this.

Mogsy: I’ve been wondering at this for this whole last section. So far, Cathy and Max both seem to have major roles to play, but I don’t know what their connection is and it’s really bothering me! I assume it has something to do with the case of the missing Master of Ceremonies since that’s one of the more significant topics I noticed mentioned in both character threads.

4. We get up close and personal with Cathy’s family. What do you think of her brother Tom and sister-in-law Lucy? Her parents? Do you think she’ll have any allies going forward?

Mogsy: The way things are going, I definitely think she will find an ally in her sister-in-law, and her brother should come around in time as well, consider the way he’s already taken the first step in understanding the depth of Cathy’s feelings for Josh (leaving me wondering if Tom’s new-found empathy could be the recent result of Lucy rubbing off on him).

Cathy’s father, though, is a real piece of work, isn’t he? I cheered when she stood up to him, but the subsequent beating was pretty brutal. Part of me wanted to see her fight back, maybe give him a swift kick in the shins (or some place higher) before getting the hell out of dodge (surely she can outrun the old man?) Her mother’s not going to be much help, clearly.

Tiara: I like Lucy, of course. I hope that my like of her doesn’t prove to be misplaced in the end. I’m a bit on the fence about Tom, but if his wife can be taken at face value, his wife’s influence with the love he obviously has for Cathy will bring him around… probably… Her sister is a ninny, and her parents are just awful.