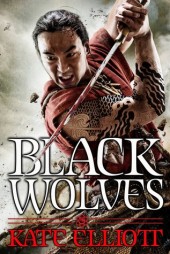 Kate Elliott is on fire this fall with the release of this first novel of a new series, set in the same world as her celebrated Crossroads trilogy. What can I say, but Black Wolves is a sweeping masterpiece that will leave fantasy readers spellbound. Coming in at nearly 800 pages–all jam-packed with richness and beauty–this epic novel sank its talons in me and kept me enthralled for days on end until I finished it. No question about it, this is my favorite book by the author yet.

While Black Wolves is technically the beginning of a sequel trilogy to Crossroads, reading the original series is not a prerequisite to starting this book. The characters and events appear pretty separate, seeing as we do jump 44 years ahead in time after the first 90 pages, though the preceding section does introduce a couple of the main characters. First there’s Kellas, captain of the Black Wolves, an elite fighting force dedicated to serving King Anjihosh of the Hundred. Then there’s also Dannarah, Anjihosh’s young daughter who dreams of a life beyond being married off to some foreign land for political gain.

After the time jump in Part Two, we discover that Dannarah has gotten her wish, having become a Marshal of the eagle-riding enforcer group known as the reeves. However, we also find out that her brother Atani, who succeeded Anjihosh for the throne, sadly died twenty-two years ago, murdered in a traitorous plot. Captain Kellas, the man who was charged to protect Atani, saw the death of his king as a personal failure and retired to a life of obscurity after disbanding the Black Wolves.

But now Kellas, old as he is, has been called to serve again. Unlike Anjihosh and Atani, the new king is weak, unable to hold the Hundred together in the face of social unrest, corrupt politics, and conniving palace schemes. Fearing demon assassins in the shadows, the king calls upon Dannarah to coax Kellas out of retirement so that the former Black Wolves captain can serve as his protector. Mindful of his own tumultuous history with the royal family, Kellas is reluctant at first but eventually agrees. Politically unstable and rife with strained relations, the Hundred is a land in need of men and women like Kellas and Dannarah to protect it right now—but first our heroes must make peace amongst themselves and determine where their loyalties lie.

With such a huge jump forward in time and all the subsequent flashbacks throughout, it’s probably no surprise when I say that pacing was the story’s main weakness. For almost a hundred pages, we got to know and love Kellas and the royal children Dannarah and Atani, but with one turn of a page, everyone became forty-four years older. Worst of all, clever and precocious Atani, the boy prince who so enjoyed thwarting King Anjihosh and getting his guardian Kellas into all sorts of trouble, is already dead! Granted, I probably wouldn’t have felt so terrible if I didn’t like the character so much, but it was still hard not to feel cheated. Also, call me crazy, but I don’t like missing out on huge chunks of a character’s life. Flashbacks are a handy plot device, but they just aren’t the same (not to mention, they can be confusing). I wanted to be “in” the moment when Dannarah became a reeve, or when Kellas fell in love with a demon, instead of experiencing all of those events through memories.

But as you can see, I still loved Black Wolves, and indeed the pacing issues resolved themselves about a third of the way into the book. While it was not immediately apparent, there were good reasons for the time skips. With a book so all-encompassing and massive, you do have to allow for a lot of story organization and set-up. As expected, the beginning of the book was slower as Elliott prepared the stage. Patience paid off big time in this case, as the pieces of the plot gradually fell in the place and the story built up momentum. The world-building was to die for, and in addition to Kellas and Dennarah there were other supporting characters like Lifka, Sarai and Gilaras to fill out this ensemble cast. Everyone had a vital role to play in this intricate web, with all the relationships and connections culminating into a stunning finale.

On the subject of characters, the ones who stood out most were the women—no contest there at all. Despite my misgivings surrounding the huge time skip, I took an immediately liking to the aged version of Dennarah. Not only is it a breath of fresh air to see an older woman playing a starring role in an epic fantasy novel, she’s also a force to be reckoned in her position as an experienced fighter and peacekeeper. Then there are Sarai and Lifka, young women who refuse to be pawns, instead stepping up to seize control of their own destinies. These heroines feel larger-than-life but also down-to-earth at the same time, a testament to the incredible character development and the careful way Kate Elliott crafted the women’s histories.

So if you love epic fantasy, you’ll want to check out Black Wolves, a powerful novel that excels in the traditions of the genre—rich storytelling, vivid world-building, and dynamic characters. If that’s what you’re looking for, Kate Elliott’s got you covered.

← YA Weekend: Wolf by Wolf by Ryan Graudin
Top Ten Tuesday: Top Ten New-To-Me Favorite Authors I Read For The First Time In 2015 →