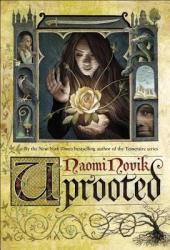 I was excited when I learned that Naomi Novik would be writing a new fantasy novel “rooted in folk stories and legends” in the vein of Grimm Fairy Tales, and even more excited now that I’ve read it and the book has exceeded all my expectations. I’m already a fan of Novik’s from reading her Temeraire series, but not only is Uprooted quite a departure, the change is also like an exhilarating breath of fresh air.

The story of Uprooted is simply spellbinding, with magical elements and traditional Polish fairy tale influences, all superbly woven into the fabric of the narrative. We begin with an introduction to our protagonist Agnieszka, just another simple girl from yet another simple village, but the bucolic setting belies something more sinister lurking beneath the surface. Surrounding Agnieszka’s valley home is the ever encroaching Wood, a forest filled with dark energies and spirits, whose corrupting force has trapped and stolen the lives and minds of many.

Every so often, the wizard in the tower will descend to the valley and work up powerful spells to drive away the malicious effects of the Wood. Cold and aloof, this sorcerer also known as the Dragon helps the villagers keep the evil at bay, but also exacts a steep price: every ten years, he chooses one young woman and takes her away to live in his tower until she is released and the next choosing begins again. No one really knows why he takes the girls, but there is speculation of course, and none of it is good. Agnieszka will be up for the choosing this year, but the villagers already know that the Dragon will take bright, bold and beautiful Kasia, Agnieszka’s best friend who exemplifies everything the wizard looks for. So it was a shock to everyone, most of all to Agnieszka herself, when the Dragon ends up passing over Kasia and chooses our poor, discombobulated protagonist instead.

But life with the Dragon was much different than she’d expected, of course. In an intro that has shades of Beauty and the Beast, Agnieszka discovers that the wizard can be reticent and brusque, but he’s not altogether unkind, the bountiful insults he hurls at her notwithstanding. She even learns his real name – Sarkan. The two of them negotiate an unspoken agreement for a peaceful, if not completely cordial, coexistence. But then they discover that Agnieska actually possesses a talent for magic full of untapped potential, which complicates things. And then comes the news of more corruption by the Wood and rumblings of war from the royal family at the capital, which complicates things even further. Out of necessity more than anything, Agnieszka and Sarkan start experimenting with casting their magic together, even though their spellcasting styles are vastly different.

Let me just say right off that I don’t think Uprooted is a Romance; all the romantic elements could have been scrubbed from the story and it would still have read just as smoothly and worked just as well. But that just makes it even more amazing to me! Those who know me know that I’m not one to fawn (and I mean really fawn) all over love stories or develop crushes on fictional characters. That’s just not my style, nor have I come across many authors who can write a romance arc which could warrant that kind of reaction. But brava, Naomi Novik has done it! There were really only two scenes of what you would call “red hot nookie”, but it was enough; the sexual tension in the deliciously slow-burning relationship between Sarkan and Agnieszka had me fanning myself. Whew!

More amazing is that Novik utilizes two tropes that normally would have had me grinding my teeth, but somehow, they just worked here. The first trope is the older and more experienced male mentor with the young, just-coming-into-her-power female apprentice. The second is the “Male love interest who is a jerk and treats our heroine/protagonist like crap” trope (I swear, he calls her an idiot or insinuates that she’s a dullard at least once in every chapter the two of them appear together), because we all know bad boys are sexy, right? Well, whatever floats your boat, but that just has no appeal to me at all. But then why did it work so well with the Dragon/Sarkan here? I still don’t really know. If I could hazard a guess though, I would chalk it up to the author’s skill at drawing up her characters so that Sarkan became a very real entity, allowing me to compartmentalize his foibles and even understand the reasons for them. He may be unpleasant, but he’s honorable and well-intentioned.

Perhaps my only complaint is that the book ran a tad too long for my tastes, and there was just not enough of Sarkan (can you tell my character crush is showing?) because he is absent for almost half the book after Agnieszka heads to court. But these little quibbles are overwhelmingly outweighed by the good parts. The world of Uprooted is a fairy tale land brought to life, held in the clutches of a villain which turns out to be an evil forest. Kudos to Novik for pulling that off. Using vivid imagery and a complex system of traditional magic, she makes the idea of the spiteful and malignant living Wood truly terrifying. The type of magic envisioned here also fits the tone of the book. Novik portrays it as an ancient and mysterious force, its effects erratic and malleable in different magic users’ hands (I still can’t get over the excitement of those crazy mage battles!) This rich blend of dark and whimsical complements the fairy-tale feel of the story perfectly.

All told, Uprooted was truly captivating. I’m getting these pleasant little shivers up my spine just thinking about the book again. Fans of Naomi Novik will not be disappointed. That magical, adventurous quality in her writing which first made me fall in love with His Majesty’s Dragon is alive and well, presented here in a different but just as irresistible package. Highly recommended.

← Book Review: The Dragons of Dorcastle by Jack Campbell
Novella Review: The Shadow of Elysium by Django Wexler →