Tour Review and GIVEAWAY! Master of Plagues by E.L. Tettensor

*** The giveaway is now over, thanks to everyone who entered! *** 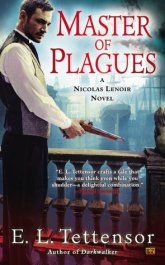 Master of Plagues by E.L. Tettensor

Author E.L. Tettensor has been on my radar ever since reading her excellent debut Darkwalker and I couldn’t have been more thrilled to find out in the summer of 2014 that she will be returning to the world of Nicolas Lenoir with a fresh new sequel featuring the eponymous detective.

Having been given a new lease on life following his harrowing encounter with the grim spirit Darkwalker, Lenoir is back to work with a renewed energy. But his resolve is tested almost right away when a disturbing new case sets the entire Kennian police force on alert. A deadly new disease is ravaging the city, inflicting fever, vomiting, and massive internal and external hemorrhaging on its victims. The symptoms and mortality rates are bad enough, but then comes irrefutable evidence that the plague was ruthlessly unleashed on purpose. But by whom?

In this incredible follow-up, Lenoir and his partner Sergeant Bran Kody are racing against time on the trail to find a mass murderer in the midst of widespread fear and panic. City resources are stretched to the limits and still more people are dying by the day, and it’s a whirlwind of suspense as all those trying to hold things together find themselves torn between finding the culprit, or finding a cure.

I can’t tell you what a joy it is to be back in this world reading about these characters, especially since they’ve grown so much since the first book. Inspector Lenoir is a no longer the jaded curmudgeon he once was, and now that his apathy has lifted we can finally see his brilliance shine. That’s not to say his personality has done a complete one-eighty; he is still the fastidious detective with a tongue as sharp as his mind. And as Sergeant Kody is so often reminded, the inspector is not given to coddling himself or anyone else. However, that has not stopped the two men from becoming closer as a unique working relationship develops between them. Kody’s character is also explored a lot more in this installment, with his perspective given plenty of page time. The sergeant starts coming into his own, taking the lead on some parts of the investigation and standing up to Lenoir he feels are important. It’s good to see these two evolve together, as it’s clear they can learn so much from each other.

The world of this series is as rich and evocative as ever, even in the grip of a deadly disease. It’s interesting to note that the fantasy elements are not as strong in this book as it was in the first. Aside from the involvement of Adali healing, Master of Plagues is relatively light on magic and the paranormal. In spite of this, I think this makes the novel even more engaging. For one thing, it would be impossible to read this story without pondering its parallels to current events, in light of the Ebola outbreak in Africa and the fear that it sparked across the globe in 2014. Not only are the symptoms of Kennian’s plague disconcertingly similar to those of Ebola, social effects like mass hysteria and the discrimination against a specific group of people are also themes that will ring all too familiar. It’s not surprising, since Tettensor has stated that she draws a lot of her inspiration from the real world and her own experiences living and working in Burundi. The basis for the fictional Adali culture, for example, has some of its roots in the pastorialist societies of northeast Africa and elsewhere on the continent.

All told, Master of Plagues is another deftly written novel, a worthy sequel that is every bit as good as its predecessor. Both books have gotten 5 stars from me, and I don’t have to tell you how rare that is. But that’s what I like to see! Like Darkwalker, this book takes the reader on a delectable journey to get to bottom of a grand mystery, and there are plenty of plot twists and surprises along the way to keep you on your toes. Nicolas Lenoir is a character that has quickly grown on me, and I can’t wait to see what he’ll get up to next.

A review copy of this book was provided to me by the publisher in exchange for an honest review. My thanks to Roc Books!

The publisher has very generously offered The BiblioSanctum an opportunity to host a giveaway for one print copy of Master of Plagues! With apologies to international readers, this giveaway is US only. To enter, all you have to do is send an email to bibliosanctum@gmail.com with your Name and valid Mailing Address using the subject line “MASTER OF PLAGUES” by 11:59pm Eastern time on Tuesday, February 3, 2015.

14 Comments on “Tour Review and GIVEAWAY! Master of Plagues by E.L. Tettensor”