Audiobook Review: The Wolf and the Woodsman by Ava Reid 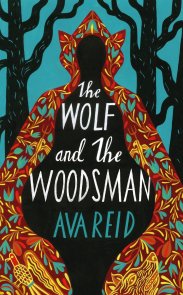 The Wolf and the Woodsman by Ava Reid

The Wolf and the Woodsman takes us to a small pagan village called Keszi, where our protagonist Évike is the only young woman among her wolf-girl peers without any powers. This leads her to be shunned by the rest of the villagers, who whisper behind her back about her parentage, blaming her Yehuli father and his corrupted bloodline for her lack of magic. Every few years though, the Holy Order of Woodsmen will travel through the village, taking a magic-wielding wolf-girl as a sacrifice to their king as tribute. Évike figured she would be of no interest to them, but when the soldiers arrive on that fateful day demanding a seer, she is handed over to the Woodsmen by Keszi’s leader under false pretenses.

On the way back to the capital though, their party was ambushed by monsters, leading to the slaughter of all save for Évike and the lead Woodsman. His name is Gáspár, and it turns out he is actually the crown prince. Furious that Évike is not who she claims to be, he is nonetheless aware that they must work together if they are to survive. Of course, it helps that Gáspár knows what it’s like to be an outcast. His own people distrust him because his mother is a foreign queen, and he also worries that his brother, Nándor, will try to usurp the throne. To keep Keszi from being destroyed by the king’s wrath, Évike enters into tenuous agreement with the prince, promising to help him stop his fanatical brother.

As their alliance strengthens, the feelings between Gáspár and Évike also continue to grow. What follows is a tale of action and adventure, palace intrigue, beguiling magic systems and world-building, and tender romance. On a deeper level, each of the characters also embark on their own journeys of self-discovering and acceptance. The world has given Évike very little reason to show mercy, having lived her whole life treated like a second-class citizen by the villagers of Keszi, and yet she will not allow the darkness of the past overshadow the goodness in her heart, no matter how full of rage she may be. Gáspár too has led a troubled life, despite being royalty. His father is a power-hungry maniac, and his cruel and vindictive brother Nándor isn’t any better. Gáspár had no need to risk his life, but for the sake of his people and their future, he would not stand by and let evil continue.

The story and themes behind The Wolf and the Woodsman are also heavily influenced by Jewish mythology and folklore, as well as Hungarian history and fairy tales. So if you enjoyed the works of Rena Rossner like The Sisters of the Winterwood and The Light of the Midnight Stars, or books like Spinning Silver by Naomi Novik, this definitely falls within the same vein and might be one to check out as well. The sources from which the author draws her inspiration are varied and rich, and it’s fascinating the ways she incorporates and transforms them for the story. There’s also a strong dash of horror elements, a smattering of traumatic sequences with descriptions of violence, blood, and gore. So it’s good to keep in mind while there is plenty of magic and beauty in this novel, it’s not so gentle either.

So why not a higher rating? Like so many debuts, The Wolf and the Woodsman suffers from pacing issues. The typical pattern applies here: a strong intro peters out into a dragging middle, made slower and more meandering with a romance arc and general overcomplication of the plot, and then finally finishing with an explosive ending. To be sure, there are high points as well as the low points, but I would say the latter seem more frequent and prolonged. While listening to the audio version, there were parts where I tuned out when my attention wandered, but found I couldn’t really be bothered to go back and relisten, and in the end it didn’t even matter because it turned out I missed nothing important anyway. Too often, the narrative takes far too long to get to the point, leading to a too busy plot and a lack of focus, ultimately dragging down the experience.

Still, it’ll likely be worthwhile for the right audience, say, if you are a fan of the aforementioned authors and books, and certainly if you are a fan of fantasy romance or folklore and mythology inspired stories you may wish to give The Wolf and the Woodsman a closer look. The audiobook edition I reviewed was also well done, read by the very talented Saskia Maarleveld who is one of my favorite narrators.

11 Comments on “Audiobook Review: The Wolf and the Woodsman by Ava Reid”