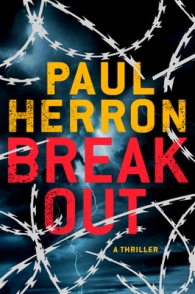 Break Out by Paul Herron

I recently found out Paul Herron is the pseudonym of Paul Crilley, a television, comics, and games writer who has also written a couple fantasy novels I’ve enjoyed. Breakout is his debut thriller. My verdict? It’s like your classic high-octane action movie meets Arkham Asylum—as over-the-top and popcorny as expected, but still shockingly good! You’ve got your tortured antihero ex-cop with nothing to lose. A rookie prison guard whose first day on the job goes horribly wrong. A perfect storm created by two Category 5 hurricanes coming together, barreling down on the Floridian coast. And right in its path sits the infamous Ravenhill Correctional Facility, home to the worst criminals in the country.

One of these inmates is former police detective Jack Constantine, currently serving ten years for brutally gunning down one of the men who killed his wife and unborn child. As the story begins, the warden has ordered all the prisoners to fix up a dilapidated but sturdier part of the old penitentiary to make it more suitable for them to ride out the storm. When Jack hears that his wife’s two remaining killers will be among those who will be relocated to this section of the prison, he can’t believe his luck. He’s never regretted his crime; he’s only sorry that he never got to finish the job. But soon, it seems he may get his chance to do so after all.

Meanwhile, Kiera Sawyer is trying not to freak out as she reports in for her first day at Ravenhill. She knows she probably shouldn’t have come. A monster of a storm is blowing in, and there’s been talk of mandatory evacuations for this part of the state. No one would blame her if she had simply decided not to show up. But Sawyer knows she can’t risk anything jeopardizing this job. She desperately needs it, for the sake of herself and her younger brother. In the end though, keeping the job becomes the least of her worries. The superstorm hits, and it’s worse than anyone could have imagined. Out of time, the warden decides to evacuate his people. As for the prisoners, it is too late for them. As a final act of mercy, one of the officers unlocks the doors to all the cells, giving their occupants at least a chance to survive the rising flood. Once the inmates realize that there’s no one left to guard them though, bitter rivalries are reawakened and old scores are settled, turning the prison into a bloodbath in the middle of the raging storm.

In all the chaos, no one notices that someone had gotten lost and left behind. Someone so new on the job, she’s not even on any of the staff rosters yet, let alone the evacuation list. Sawyer, left to fend for herself in all this madness, knows her only chance of survival is Jack Constantine, a man who doesn’t really belong in here with the rest of the habitual criminals and psychopaths. The only question is, can he move past his own demons to save them both?

I won’t even bother explaining why Break Out would make a good movie, as it already reads like an off-the-shelf screenplay. Here, the author’s experience as a television and script writer was clearly on display. Reading this book felt a lot like watching old school Bruce Willis in Die Hard or Nicolas Cage in The Rock. In other words, it was fucking awesome. If you’re looking for something intellectual, original, and deep, this is not the book for you. If you want stories that are realistic and plausible, again, this is not the kind of book for you. But if, on the other hand, a furiously entertaining, non-stop action thriller that checks off all the genre boxes is to your liking, then this will do for you nicely.

Nothing too complicated to it, really. No elegant grand plan, beyond setting all the violence and chaos in a maximum-security prison in the middle of a colossal hurricane, and that’s because all the ingredients for mayhem are already there. Remove the law and order, and what do you get? Killers, robbers, kidnappers, abusers who now have the run of the place but nowhere to go. Alliances are swiftly formed in a battle for dominance between warring gangs, but even those who survive this initial slaughter must then contend with the raging storm, which threatens to drown them all in an endless torrent of rain and seawater. In this arena of death, only the most ruthless and insane survive…or those who try to play it clever, like Constantine and Sawyer. The two of them make a great team, along with Constantine’s cellmate Felix.

Bottom line, I had such a wild and crazy time with this. Not the kind of novel I would recommend to everyone across the board, obviously, but if your tastes happen to run towards books that read like an action movie in prose form, then Break Out might just surprise you, like it did me. It’s the epitome of a popcorn read—undemanding and fun, and just in time for beach read weather. Paul Crilley/Paul Herron, please write more thrillers.

17 Comments on “Thursday Thriller: Break Out by Paul Herron”