Thriller Thursday Audio: The Girl Beneath the Sea by Andrew Mayne 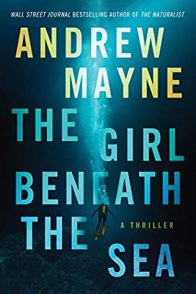 The Girl Beneath the Sea by Andrew Mayne

Well, it’s not The Naturalist, but still so good! What’s also pretty awesome is that last summer I caught the author on the Discovery Channel Shark Week special Andrew Mayne: Ghost Diver, and now I can’t help but wonder how much of his experience doing for that show had ended up influencing this book. Plus I believe I read somewhere that Mayne grew up among scuba divers and law enforcement, so when I first learned about The Girl Beneath the Sea, I became curious to see how he would incorporate those ideas and concepts into this new thriller.

As the opening volume to a new series, The Girl Beneath the Sea begins by whisking readers off to the south Florida coast where protagonist Sloan McPherseon works for the Lauderdale Shores police department as an evidence recovery diver. On a routine dive in the canal one day, she comes across a recently dead body in the water—a woman who must have been killed and dumped not moments before Sloan got there. Unfortunately, that timing was just a coincidence too great for the police to ignore, landing Sloan on their suspects list. Of course, it also doesn’t help that she comes from family of eccentric treasure hunters and drug smugglers, with an uncle who’s in prison. Then comes an even greater shock—it turns out that the dead woman had a connection to Sloan’s past, making the authorities even more suspicious.

Now the only one who can help her is the McPhersons’ greatest enemy. George Solar is the DEA agent whose testimony had been pivotal in putting Sloan’s uncle behind bars all those years ago, and the memories of how that had devastated her family are still fresh in her mind. Solar’s history, however, has also been known to be rather shady, which means he may have the knowledge and connections to help Sloan out of her mess, leaving her with no choice but to trust him. As the two of them team up to investigate the murder though, they stumble into a vast conspiracy brewing amidst widespread corruption, and the deeper they dig, the more they may be putting both themselves and their loved ones in possible peril.

While it’s definitely tempting to compare The Girl Beneath the Sea with Mayne’s Naturalist series, I realize it’s not that simple. The two are very different, for one, and quite honestly I think that’s a good thing. Ultimately, I would love to see Underwater Investigation Unit establish its own identity as a series and stand on its own merits, and based on this first installment, I think it’s off to a great start. The good news is that we also don’t sacrifice any of the over-the-top action and thrills that are the hallmarks of the author’s books, though the difference is, The Girl Beneath the Sea reads more like a police procedural in its structure and pacing, emphasizing law enforcement and interagency detective work. The storytelling style itself is very similar to the crime dramas you might see on primetime TV.

Since it’s Florida, there are also gators, sharks, and the drug war. Sloan and Solar’s battle with the cartels and corruption among the ranks might not prove as thrilling for some, but to me the plot was fast-paced and exciting. As well, Sloan is a great character, maybe a bit rough around the edges. Like many of the author’s protagonists, her greatest fault seems to be her impulsivity and tendency to act quickly with little consideration of the consequences (but hey, that’s what makes his books so fun, right?) I ended up liking Sloan, despite the fact she’s a bit of a maverick and one hell of a troublemaker, mainly due to her courageous spirit and her big heart which makes up for her shortcomings. She’s also a single mom in a family with a lot of quirky members and complicated relationships, as you might imagine given the McPhersons’ history with the law and Sloan’s career with the police. Throw in her prickly situation with Solar as well, and you just know there will be no end to the surprises.

What all this means is, if you’re into Andrew Mayne’s clever, funny, and over-the-top style, I think you will also enjoy The Girl Beneath the Sea. In a way, I think the novel’s premise actually makes it more plausible than many of his other works (relatively), but the approach he takes to the crime drama procedural is certainly still unique and very interesting. Bottom line, this was an entertaining adventure and I had a hell of time. It also looks like the sequel Black Coral already has a cover, synopsis, and release date, so I guess I’ll be circling my calendar and waiting not so patiently!

Audiobook Comments: I listened to the audiobook edition, a decision I don’t regret at all. I often find that thrillers are more effective in this format especially when you have a good narrator, and Susannah Jones completely nailed it. Everything about her performance was outstanding, from her voices to her timing. She kept me hanging on every word, ending up making me stay up way past my usual bedtime so I could find out how the book ended. So if you’re considering The Girl Beneath the Sea, I do highly recommend this one in audio.

18 Comments on “Thriller Thursday Audio: The Girl Beneath the Sea by Andrew Mayne”