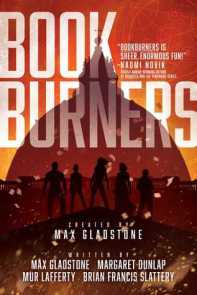 Bookburners initially landed on my radar around a year and a half ago when it was first announced as the launching project by Serial Box, a publisher with an ambitious new idea to deliver their stories in a weekly serialized medium. The plan was that “Season One” will be a 16-episode run, written by a team of authors made up of Max Gladstone, Margaret Dunlap, Mur Lafferty, and Brian Francis Slattery. Though at the time I was only familiar with Gladstone’s work, it was enough that my interest was immediately piqued.

But as much as the concept of serialized novels intrigued me, it didn’t long at all for me to realize I preferred my books the same way I prefer my TV shows—as in, binge-watching a full season all at once. Sure enough, I tried to follow Bookburners when it first came out and promptly fell behind, which is why I was so glad when I found out that a collected edition was coming from Saga Press. I honestly loved what I saw of the first couple episodes, and thanks to this more convenient format, I finally got my chance to catch up with the full season.

Now, I’ve always admitted a huge weakness for “books about books” but what I liked about Bookburners is its unique take on the subject. You have a kickass lady cop, her wayward brother, and a group of demon hunters from the Vatican, and before you know it the stage is set for an urban fantasy adventure that will make you see “dangerous reading” in a whole new light. For NYPD Detective Sal Brooks, it was just another day on the grind when she gets a strange phone call from her brother Perry asking to hide out at her place. Over the years, Sal has become used to Perry’s idiosyncrasies, but this time, she knows something is seriously wrong. Turns out, her brother has gotten himself into some deep trouble, and it all comes down to a demon-possessed book.

Soon, Sal finds herself entangled with a Catholic priest and his secret team of agents whose mission is to travel all over the world tracking down and securing dangerous books infused with nasty magic. The book in Perry’s possession is revealed to be one such artifact, but the intervention comes too late and he succumbs to its evil. Now in order to save her brother’s life, Sal has little choice but to join up with Father Arturo Menchú and the Bookburners (even though they don’t actually burn the books), relocating to Rome to help fight for the cause. She quickly discovers a whole secret world that the Vatican’s Societas Librorum Occultorum has been keeping from the public, but a recent string of deadly magical threats is about to bring everything crashing down.

At first, I thought the structure of Bookburners was going to be like any other traditional novel which just happens to be released in 16 parts. So I was pleasantly surprised to find that each episode actually contains its own mini-story roughly complete with intro/exposition, rising action, climax and resolution, etc. Together, the 16 sections then make up a more complete and overarching season plot, so that in a sense, the format really does mirror that of a TV show. With Bookburners, I also noticed that the episodes grew progressively deeper and more complex, so for instance, earlier episodes that played more to the “Monster of the Week” trope would gradually give way to ones that contributed more to the overall “bigger picture” storyline.

This definitely affected my experience with the characters. I started the book not really caring all that much for anyone but Sal, but as each episode went on, her relationships with the other team members were explored. Eventually I became a fan of the whole cast, especially Father Menchú, whose portrayal was a breath of fresh air in contrast to the clichéd representations of religious figures I’ve seen in many other books; and also Grace, whose “origin story” wasn’t revealed until an episode halfway through the book, but wow, it was well worth the wait! Grace might have started the season as one of the most mysterious and least developed characters, but by the end of it I was in love and I wouldn’t be surprised if she ends up being a favorite for many others too.

But even though hands down Grace had the coolest and most unique backstory, it’s really just the tip of the iceberg. You’ll find so many more incredible and creative ideas in here, because every episode offers something different and new. A few of my favorite ones include “A Sorcerer’s Apprentice” (the one where Sal and Asanti go to Scotland and find that an entire town has become crazily obsessed with a restaurant), “Under My Skin” (the one where the Bookburners head to Vegas to investigate the competitors on a tattoo reality TV show, after the people getting inked start dying one by one under mysterious circumstances) and “Shore Leave” (the one where Grace and Sal get to spend some buddy time together on their shared day off). Probably not a coincidence that all three are written by Mur Lafferty, who has certainly gained a new fan in me after this book, but truly, all the authors involved did a fantastic job. Their styles and voices complemented each other very well, leading to seamless transition from one episode to the next, which became all the more important towards the end of the season when everything had to come together for the final showdown.

In case you couldn’t tell, I am beyond ecstatic that I got to read Bookburners in its entirety. With the serialized format, it’s always tough to know whether something will work or not, since a project often takes more than a couple episodes to take off (and I’m not exactly a font of patience either, so having to wait for anything tends to take the air out of my sails). Needless to say, I saw plenty of potential back when the first episode was released, but having this collection and being able to binge read several installments all at once was what ultimately got me well and truly hooked. Bookburners was a lot of fun and now I can hardly wait for Season Two.

← Waiting on Wednesday 02/01/17
Book Review: The Rising by Heather Graham and Jon Land →